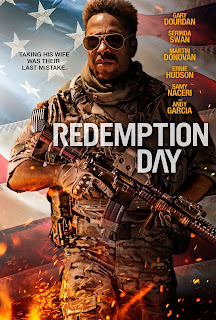 U.S. Marine Captain Brad Paxton (Gary Dourdan) suffers from PTSD caused by a mission in Syria that went bad. Struggling to return to normality, his home life is uprooted when archaeologist wife Kate goes on a dig near the Morocco-Algeria border and is kidnapped by ISIS-aligned Algerian terrorists led by Jaafar El Hadi (Samy Naceri). Bypassing the bureaucracy and Federal policies, Brad sets upon a mission into enemy territory to rescue his wife and at the same time find himself some redemption.

Let’s set expectations up front. This is not a 90 minute roller-coaster action shoot-em-up. Outside the final act, this is an intentionally paced, tense build up with little direct action for most its running time. But don’t change channels just yet, because this is no bad thing. I wouldn’t go so far as to say this was a slow burn, but it is definitely in no hurry to get to the conclusion.

When we do get the action it’s well executed, if sporadic, military versus insurgents battle tactics. Brad gets to shine as he dispatches terrorists with total precision, be it up close with a side-arm or from a balcony with a sniper rifle. Accompanied by his Moroccan counterpart Younnes (Brice Bexter), the one-two punch in the final siege on the terrorist compound has some heart-racing moments. Headshots are bloody and not obviously CG (muzzle fire isn’t fake either). The dark tone of the film means we get some gritty closeup killings with blades as well.

So how is Gary Dourdan? Now I’ve never seen any of the series CSI: Crime Scene Investigation but apparently he was a leading character in that for eight years. What I have seen him in was Alien: Resurrection, a long time ago and looking much younger with dreadlocks, but in Redemption Day he was pretty authentic. When faced with the reality of the situation and what he must do, his character of Brad Paxton battles his own demons to rescue his wife Kate (played believably by Serinda Swan) with blazing accuracy and attention. He definitely felt like a military Captain who had seen some shit, and was laser-focused on the job. Being that the mission is not sanctioned, Brad is doing this for – as the tagline says – love. There’s a little bit of a “Taken” vibe to his portrayal which explains why he never smiles.

Let’s talk Samy Naceri as terrorist leader Jaafar El Hadi. We last saw Samy many years ago in the French language comedy-action film Taxi, and boy is he different here. I don’t think I would have recognised him if his name wasn’t on the cover. I really liked his take on an ISIS commander. Had just the right amount of “manic” without going overboard, though he was ruthless when needed – takes out more than one of his own for being incompetent. I like that in a terrorist. He has a far more manic first officer who is like a rabid guard dog, spitting foam and quickly turning to anger and violence. I like that too.

Now, Ernie Hudson is not the kind of minor character role I would expect in a film like this, but I’ll take any Ernie over no Ernie. When it comes down to it however, he has two scenes – helping Brad Paxton face his traumas in the boxing ring, and helping Brad Paxton by taking care of his daughter in his absence. They aren’t momentous scenes but Ernie’s role as Brad’s father is meant to provide a calming Ying to Brad’s tortured Yang, which works to some degree but really, we could have used more Ernie. We did however get a reasonable amount of screen time from Andy Garcia as the Ambassador, though his role as Cuban-cigar smoking facilitator doesn’t really leave much to write about.

There are some parts of the film that take the shine off a little; the first I might put down to poor subtitles. In a prayer scene with the terrorists, El Hadi speaks and the translation on screen is “(praising God in bad Arabic language”). There is no comedy in this film, let alone this scene, so not sure what the intentions were here but it comes off pretty rough. Maybe it was to do with his French-Algerian accent, I don’t know, but I did rewind it to check that I read it correctly.

Robert Knepper is one of those “that guy” types, apparently in the IMDB top 5000 with 142 acting credits including Transporter 3 and Hitman. He has a brief role as an Oil Tycoon that has a lot more to do with the plot than might initially be presumed, though I’ve got to say his scene was pretty damn hammy. Very Colonel Sanders Texan white suit with a wide hat and gold tipped walking cane. My oh my. This felt like an after-credits sequence rather than part of the main film. Voltage Pictures, your Seagal is showing.

The other main thing that sticks out like a sore thumb is the brief scene with the President and the other members of the White House over video conference with the ambassadors. The acting skills drop drastically when the Executive speak, the worst coming from The President – played by Jay Footlik. According to IMDB, this guy has had a couple of minor roles spanning back to Teen Wolf but was in fact a White House advisor to President Clinton. Not sure how he ended up in the film but the quality of that scene really took me out of the moment. The final CG shot of helicopters flying over the ocean was also pretty bad, which was quite unexpected given how good the long-shots of military vehicles in the Morocco landscape were looking earlier.

Overall I dug Redemption Day. It’s not without its problems, and if you want wall to wall shootouts you came to the wrong party, but its heart was in the right place and the execution – for the most part – was well articulated and often gripping. A solid full length feature directing debut for Hicham Haji.