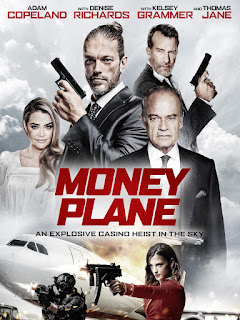 An explosive casino heist in the sky

Jack Reese (Adam Copeland) is a highly skilled thief with a massive gambling debt. After a failed art gallery heist, he is now owed to underworld crime boss Darius Grouch aka The Rumble (Kelsey Grammer aka Frasier). Jack and his team of heisters are forced to take one more job - board a high-stakes, airborne casino known as the "Money Plane" that flies in international airspace. Filled with the leaders of criminal syndicates from around the world, Reese and his crew must rob the plane of its cryptocurrency and cash and make it out alive.

Despite problems, I had quite a lot of fun with this. First of all, this has nothing to do with Snipes vehicle Money TRAIN so get that out of your mind right now. Straight-forward heist plot with the standard double-crossing by the person who hired the heisters – oops, spoiler (as if you didn’t see that coming). The momentum only slows down for a handful of minutes in-between the first failed gallery job and the Money Plane heist (with some pretty bad sappy dialogue, I have to say) which is a pretty good score in my books. My number one rule in movies is “don’t be boring”, and I was never bored during Money Plane.

Adam Copeland isn’t bad as the lead. He’s quite restrained and always has this look on his face of “how did I get this gig?” which is kind of amusing, but he gets the job done. I couldn’t take my eyes off the top-knot, and yes ladies, he finally unleashes the full Fabio in the final scene. I was a bit taken back by the use of his role though. In this kind of film I’d expect him to be Kurt Russel in Executive Decision, but he was more (but not fully, so don’t get the wrong impression here) Steven Seagal in Sniper: Special Ops. The story has Copeland be the pilot on the plane, so he spends more than half the running time sitting in a chair and flying the damn plane. It seems a waste but it works with the story, so I can’t really complain. In a way it makes it funnier having beefcake Copeland fly stick while the wimpier tech guy (Trey, played by Patrick Lamont) fills in for him in the action department.

The most interesting of the protagonists for me is Katrina Norman’s character Isabella, shown on the poster in the red dress. She gets the best hand to hand action in the film with some neck-snapping, ear-ripping sex appeal pulled off with a sly smile and implied one liner. As for Thomas Jane, he plays the old friend from previous jobs. “Remember Brazil?” Copeland says to him. The two have history and Copeland relies on Jane for “Plan B”.

The last protagonist of note is man on the ground Iggy, played by Director and co-Writer of Money Plane Andrew Lawrence. He is there to receive the downloaded money transfer with a collection of ancient gear that looks like something ET assembled to phone home. But hey, the Director can cast himself a role if he likes.

The various villains on the Money Plane are all cartoon caricatures, which is all I really want in something like this anyway. The slimy, stewardess-arse-slapping guy, the Texan big shot that never loses, the subtle Japanese high roller – it’s all here. Special props to Joseph Lawrence as the Concierge of the Money Plane, last seen around these parts playing a robot in Android Apocalypse. He, along with bookkeeper and lonnnnnng time television actor Al Sapienza, added a professional yet somewhat sinister face of the House that I really enjoyed.

There’s a lot to be amused by in Money Plane. I don’t just mean the concept and its execution (which are frequently, unintentionally funny) but there’s a few scenes that have intentional humour; often quite black. I was shocked and laughed for a full minute at an unexpected violent death during a game of Russian Roulette. I had to pause to take breath I was laughing so hard, which doesn’t happen often to me. Much of the violence takes place during the gambling, with the Adventure Bets coming straight out of The Running Man book of sadism.

In terms of budget reflected on screen, this is mid to late 2000s era Seagal for sure. Shaky camera, CG muzzle shots and poor sound design all on display here. There’s even a bit of SyFy Channel going on with some ludicrously awful fake moustaches – check out the do on our Texan cowboy gambler. The sets are cheap but I can let it slide, as the whole thing is meant to be on a plane and you can’t very well expect a DTV action film starring an ex-wrestler to aim much higher than a faux-velvet curtained room with an Ikea bar top and a few screens on walls.

Now, let’s talk bait and switch. The cover for the film shows stylised heads of Copeland, Denise Richards, Kelsey Grammer and Thomas Jane, with Katrina Norman wielding a machine gun. There’s a plane with an explosion behind it. Denise Richards is second billed and Frasier’s head is second biggest. Copeland looks like the bounty hunter from The X-Files with a top knot. It promises a lot, but we know what these covers are like.

Richards? She’s Copeland’s wife and has literally one line and two scenes. 45 seconds of screen time at best, which is a contrast to her other recent plane heist film (where the heist was actually of the plane) Altitude with Dolph Lundgren. She was the lead in that film but is basically cutaway footage in this one. I guess the marketers are hoping people will pick the DVD up and say “hey she was the pilot in Starship Troopers!” rather than “she was the lead in Altitude”.

As for Frasier playing “The Rumble” (hah!), he is fun, and does get enough scenes to feel like you weren’t gipped. After the initial meet and greet he’s basically on video call to Pilot Copeland, barking orders and generally being snarky. I thought he did a decent job as the rich art collector, hamming up an attempt at Scarface with his big cigar and terracotta floors and some priceless dialogue: “You want to bet on a dude fucking an alligator? Money plane.” Wonder how Director Andrew Lawrence convinced him to be a part in it all. Thinking about it, his role is kind of like the bad guy version of his character in The Expendables 3 and has about the same screen time.

So, overall I had fun with this silly movie and it blasted through its 79 minute runtime. I’d have even accepted five minutes more to flesh out some of the paper-thin characters a bit, but whatever – the film is called Money Plane. We got money and we got a plane. Money Plane. Job done.