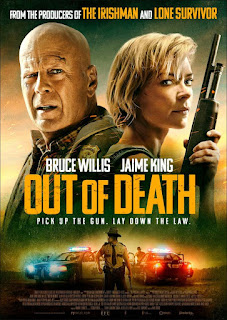 Pick up the gun. Lay down the law.

Shannon (Jaime King) is going to spread her fathers ashes in the forest that he loved so dearly. When leaving the brush for the road she happens upon a drug deal going bad, resulting in a corrupt cop murdering the dealer. Shannon manages to capture the event on her camera, which is noticed by the cop (Lala Kent as Billie Jean) who calls for help from the Sherrif’s office. Briefly captured and about to be executed, holidaying and retired ex-city police officer Jack Harris (Bruce Willis) causes a distraction and Shannon flees. Sheriff Hank Rivers (Michael Sirow) wants this mess cleaned up quietly before the Mayoral election and will do what it takes to silence both Shannon and Jack.

This wasn’t too bad. It also wasn’t that great. It’s by no means the Explosive Action that the title suggests; Out of Death sounds more like a Steven Seagal action film with that ridiculous name but it plays more like a Liam Neeson suspense-thriller, filtered through a desaturated lens to make it look like a modern zombie film for some reason. There’s the initial murder, a couple of gun shots and knife stabbings and that’s the action quotient for this film. Mostly it’s pistols held in a threatening manner.

The plot is set up early and the cat and mouse game just unfolds more and more, with a few twists and turns to keep you engaged whilst the constant, hugely annoying same piece of bluegrass music plays. At one point I thought it was a character’s ringtone, it seemed stuck in a loop. Director Mike Burns also decided to split the film into chapters with their own intro cards like it was a Tarantino film. Incidentally, Out of Death is his first feature film and it’s competently shot (if by the numbers), though I do question that choice of colour grading.

So let’s address the elephant in the room. Yes, Bruce Willis is billed as the star. No, he is not the star. But it’s not the bait-and-switch we’ve come to expect from his last decade of DTV films – not exactly, anyway. The focus for most of the film is actually on the bad guys. Crooked cops. Dodgy Sheriffs. Even the co-star on the cover, Jaime King, has less scenes than the bad guys. It’s an interesting way of doing things really, focussing on the cops and the sheriff trying to work out how to get out this mess that they are seemingly just making worse.

That’s not to say we don’t get suitable amount of Jaime and.. well, enough scenes with Bruce to warrant his inclusion. I didn’t count but I’d say there’s fifteen minutes of Bruce. We get a backstory for him being in the forest at the start, he stumbles in to save the day but that doesn’t instantly work out, and he is involved in how it all wraps up at the end. Being an ex-cop I had hoped for gunplay from him but the word that sums up his performance in Out of Death is “tired”. At least he doesn’t spend the whole film sitting down like Seagal would have, but he is his trademark unenthusiastic.

Jaime King is not an unknown actress to me, having appeared in both sequels to Escape Plan with Sylvester Stallone, and both Sin City films also with Bruce Willis. She is fine as Shannon, growing over the 95 minutes runtime from blubbering scared rabbit to accidental Rambo, before owning the role more in the final fifteen minutes of comeuppance. It would have been good to see her have a bit more oomph in the role, but I suppose the point was she was the wrong place, wrong time every-woman type.

I quite liked both Lala Kent as corrupt officer Billie Jean, and Tyler Jon Olson as corrupt officer Tom, though not immediately. Billie Jean swore enough to make a sailor blush, and Tom had a whole pile of male bravado he needed to burn off, but both played dodgy coppers quite well. However, Michael Sirow isn’t hugely believable as Sheriff Hank Rivers, it has to be said. He looks more like a mix between IT professional and magician, sporting a black collared shirt and donning the donut beard of mystery. Sheriffs in movies are meant to be fat Texans in broad-rimmed hats, not the doorman at a Russian nightclub.

I ended up feeling something for characters in this film, but it’s not the ones you expect. I think we are meant to feel sorry for Sharron being caught up in a mess that wasn’t her doing, or for Jack having lost his wife and getting dragged into this shit, but I just don’t have any real feelings for either of them. This is probably partly due to the design of the film not having the stars be the stars, but their lack of action doesn’t help matters. It’s actually the crooked cops I felt something for.

Officers Billie Jean and Tom may be crooked as a dog’s hind leg, but they don’t ever come across as truly bad. They do bad things but they aren’t cartoon-character evil, and as things get worse and worse for each of them, I started to feel pity for them. Both seemed well out of their depths, and neither wanting to really take control of “cleaning up”, which ultimately gives Shannon the upper hand. We hear briefly of their childhood together growing up. There’s a scene between both of them that is half touching and half devastating, and is the most memorable part of the film for me. Not sure if any of this was intended, but the characters – as surface-level nasty as they appear to be – were pretty flawed human beings that have clearly made a series of poor decisions that led them down this crooked path.

So that’s Out of Death, and at the tenth paragraph I am Out of Breath. Not anything I suggest you go out of your way to see, but you could do worse if it lands in your lap or if you are a Bruce Willis DTV tragic like myself.