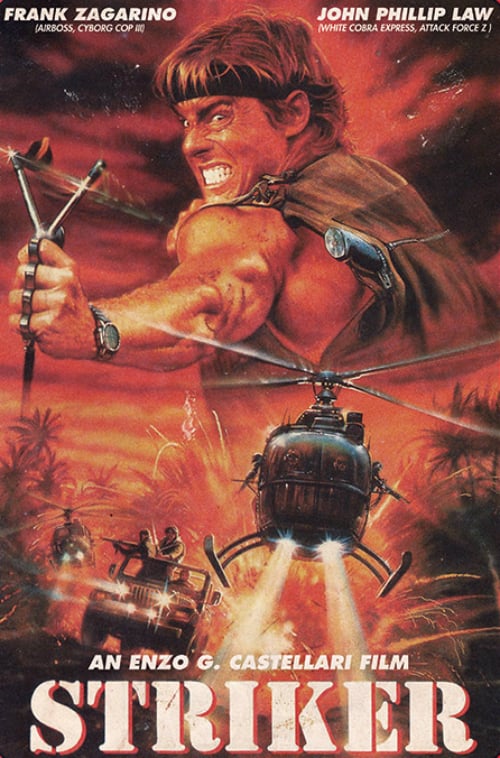 John “Striker” Slade (Frank Zagarino) is an ex-military hired to rescue  journalist Frank Morris from a Nicaraguan prison. Obviously this is a First Blood Part II type film, with equal parts one-man-army Commando and its B-cousin Strike Commando to take the seriousness down a few notches. The first shot of Zags we see him in his Canadian Tuxedo, setting the tone for the film, and it’s just beautiful.

Out for a morning stroll, Zags provides a thorough arse kicking to a masked gang that try and steal his hobo bag. Zags is arrested on trumped-up drug charges and coerced into working for the government to rescue Frank. He meets up with the attractive local guide Marta (Melonee Rodgers) and helicopter pilot “The Dutchman” Houtman (Werner Pochath) to shoot, stab and exploding slingshot his way through to cartoon-character bad guy Kariasin.

Yeah, this is what you came here for. Look at the names involved for starters. First off it stars the mighty Zags as John Rambo- .. I mean, John Slade – and believe me, like Rambo, there is one thing he better bring and that’s a good supply of body bags. And who is he rescuing but none other than Pygar himself, John Phillip Law! Next off are the co-writing duo of Tito Carpi and Umberto Lenzi. That’s Italian gold right there; the men collectively responsible for Escape from the Bronx, Light Blast, Ironmaster and Violent Naples. And if that wasn’t enough, the whole thing is directed by Enzo Castellari of Inglorious Bastards fame. What a pedigree!

John Steiner plays head goon Kariasin, and he must have had a whale of a time doing this. His moustached mouth is never without a Cuban cigar, his body permanently adorned in a tacky white safari suit. He’s holed up in his castle like Gargamel, muttering lines like “John Slade, I’ll get you yet!” and constantly calling for his number two by yelling out “SANTIAGOOOO!!” in a glorious accent. Absolutely gnawing on the scenery. In the obligatory torture scene, he slaps Zags in the face no less than five times. Great stuff.

The Zag’s fighting style always reminds me of Dolph Lundgren – martial arts based but with a heavy thunk behind it and added punching to the chest, and even some ball squeezing for good measure. We get a bit of hand to hand in Striker, but most of the action is mowing down soldiers with machine guns to the face. Being part Rambo clone there is lots of stealth and traps, including a grenade firing slingshot and piano-wire lassos from the tops of trees, and cool stunts like ziplining with an automatic weapon and bodies exploding out castle windows. My favourite trap has to be the corpse stuffed with explosives; very satisfying when that thing goes off.

Marta, Houtman and Frank are fine secondary characters that exist to push the plot forward but besides the Zags wiping out armies single-handed, and Steiner chewing his cigar and stroking his invisible cat, it was the short cameo of Daniel Greene as the very excited amateur boxer by night, truck driver by day scene that had me smiling. He has the job of driving a tired and over-it Zags into the metaphorical sunset; when Greene asks Zags if he likes boxing, his straight forward reply is “I hate violence”. Poetic, given what we just witnessed.

Downsides? Well, we really didn’t need the first scene in any movie to be a real live cockfight. That wasn’t cool in 1988 and it’s not cool now, but its easily fast-forwarded past. I expect that this scene might be one of the troublesome reasons we haven’t had a DVD release of the film anywhere yet. Definitely in the UK that scene would be removed entirely. That scene aside, there is nothing to complain about with Striker. I watched this on my Japanese VHS from Columbia which is uncut and in letterbox widescreen. There is something about watching Rambo clones and otherwise jungle slogs on this format. Not just VHS, but Japanese VHS. They just play so well and it seems so right.

Here’s a titbit I didn’t realise when going in. Striker is immediately followed up by 1991’s Project Eliminator, another Zags vehicle where he plays John “Striker” Slade again, but this time teamed up with David Carradine. Obviously that is going on the watch pile as soon as I can possibly make it happen. But for now, if you want your Italian junglesploitation with a muscle-bound Rambo clone, a mad, cigar-chewing stereotype bad guy and the obvious double-crossing in the third act then look no further than Striker. It comes highly recommended.