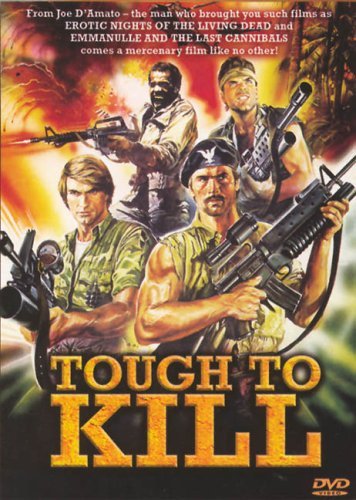 One Million Dollars Of Vulture Meat

Martin (Luc Merenda) joins the platoon of Major Hagerty (Donald O’Brien) for a steady pay check and some jungle action. On their first mission to blow up a dam in enemy territory, Martin reveals that he is actually a bounty hunter and that there is a million dollar price tag on one of the team’s heads. With this fact known, the men fight amongst themselves as to who gets the prize on their way to cash in.

If you are one to be offended by 1970s use of racist terms and treatment of anybody not American, but especially those with darker skin, turn away now. However if you can grit your teeth and bare it, there is a lot to enjoy in Tough to Kill – particularly when taken into context that some soldiers from this era likely talked and treated others like that. And given that there is some level of comeuppance as well, that helps justify things a bit and is possibly what D’Amato was going for when he plotted this out. Martin still declares this war is “One bunch of n*****s trying to take down another bunch of n*****s.”

What I liked about Tough to Kill was that it was not what I expected. I spent two months watching Teddy Page’s entire filmography of jungle action films and for the most part they are all cut from the same cloth. A General needs rescuing. Rag-tag team of soldiers fetch him back. Huts explode. That is not what you get in Tough to Kill at all. On the outset I was a little confused and impatient, as the training scenes were taking half the films runtime. The mission isn’t even assigned until the half-way mark, and once Martin reveals his true purpose the direction changes entirely to be one about greed. It starts as a slow burn but it all ends up making sense, and is actually well paced and plotted in retrospect so stick with it.

There is of course still plenty of action, otherwise we wouldn’t be here. The bulk of it is the mission itself to blow up the dam, and a few incidental fire-fights that happen before and after. The violence feels quite real, as the injured carry their pains with them the rest of the duration. One cool stunt sees Martin and stow-away Wabu evade enemy fire by running inside a barrel to make it roll as they are being shot at. Some “really, we are doing this?” moments too when two of our soldiers decide that to solve their differences they will do the “"walk ten paces, turn and fire” routine. Not even joking around, that is how they solve their disagreement.

The main proponents in this film actually have some meat on their bones in regards to characterisation that make them unique. Martin presents himself as chilled and against The Man. Hagerty is very much the definition of The Man, challenging his men to playing “chicken” with a grenade, and he gets more slime ball once Martin’s truth is out. Mike is our token Irish drunk, bartering for boxes of J&B whisky. Wabu, Martin’s “man servant” has the most growth of all and, as I mentioned earlier, there’s some comeuppance involved. However it was Polansky who I got a kick out of the most; the eccentric soldier who plays piano in the mess and is always seen carrying his pet white rabbit – even on manoeuvres when being shot at!

I laughed a lot during the film; there are some genuinely well placed gags. One of my favourites was early on when Martin arrives at the training base and disembarks the plane with Irish soldier Mike. Mike yells out to the pilot, Whitey (there’s that casual racism again), that he better move the plane or insurgents will blow it up. “The plane is the safest place to be, they’ll never hit it!” It of course explodes a few seconds later, and Mike dusts himself off saying “Ah man. They even dug Whitey his own grave for him.” Some gags that are best left in the past, like the ones involving Wabu being white-washed in limestone and forced to dunk in barrels of filth to wash back to “his real colour”. Oh my.

All in all, not what I expected and I’m pleasantly surprised by that. If you know going in that this isn’t a 90 minute blast-fest and has deeper plot with well thought out characters, despite the slurs, is a good way to spend your time if you are a fan of Italian army action.

I wanted to briefly mention that this film was also the title of a great book of Italian action films “Tough to Kill Volume 1: The Italian Action Explosion”, co-written by David Zuelo and Paul Cooke. This book was partly responsible for my exploration into Italian action cinema, as well as deciding that I could write reviews myself. While this movie Tough to Kill was not reviewed in the book, many other Explosive Action films were. Paul passed away earlier this year so it is doubtful that we will ever see a Part 2, but I wanted to credit him and David for shining a broader light on this subgenre of film for me!