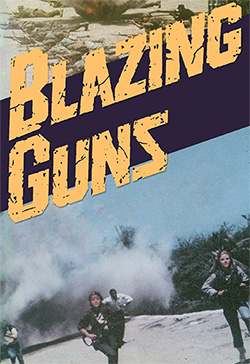 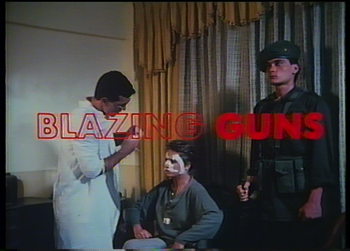 Talk about rare! What we have here is a vintage 1988 slab of Filipino (I am presuming here, but read on) jungle action from fantastic director Teddy Page (aka Teddy Chiu, Teddy Chu, Teddy Chui and in the credits of this film - Irvin Johnson!) of Phantom Soldiers fame - a film I truly love. Go have a look on iMDB for this film - it’s not there! (UPDATE: I added it!) There’s nothing about the film on Google. I know from the credits that it is a Pacific Media Film Group movie, as are other Teddy Page films such as Jungle Rats, so there’s a good chance it was shot on location in the Philippines. A lost and forgotten Teddy Page film! I’m very happy to have been able to watch and review this one, that’s for sure.

The people of Costa Brava have had enough of the leadership of President Mendoza. A rebel contingent fight his army, the general populace protest his actions and the Americans all think he’s doing a great job. That is except for Max Draven, special advisor to the US Ambassador. He has a hunch that not is all it seems and upon arriving in Costa Brava, begins investigating the President and his men. This lands him in various degrees of hot water as he is shot at, beaten up in his hotel room, chased and attempted abducted. He meets and rescues from a firefight American journalist Sheila who is of the belief that the President is faking rebel attacks with his own men and women to gain sympathy and support (and money and weapons) from the Americans. Max’s own informant and colleague Kevin is gunned down just as he reveals he has proof of what the President is doing and has mailed an expose secretly to arrrrghhhhhhhhh-dead. Eventually a package containing a key to a locker shows up to Max’s hotel room, and every force in Costa Brava is trying to get it from Max!

“You’ve been reading too many James Bond books lately!" 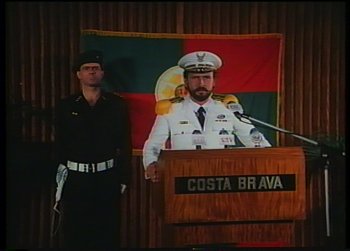 This thing was completely awesome. Every ten minutes there is a gunfight. This is no exaggeration, it is every ten minutes. It’s rebels vs. military, military vs. rebels, everyone vs. Americans - and it just gets more and more explosive until the credits roll. Machine gun destruction, mortars into buildings (and people), pistols firing with slow motion head shots, and the always championed Exploding Huts! Each hut that explodes makes my smile just that little bit bigger. Teddy Page certainly knew how to blow up a jungle. The mini-gun scene in Predator ain’t got nothing on Page’s final battle in Blazing Guns.

And if you think it’s just all jungle battles, you’d be wrong. Page throws in a plane hijacking, a fire-fight at the airport customs, a prison breakout of the rebel leader Carla (that again, gets quite explosive). The amount of extras turned into corpses in Blazing Guns is in the hundreds. And finally the Americans get involved and go ballistic with their mini-gun mounted in a helicopter, ploughing the field over and over.

The natives of Costa Brava have hysterically over-the-top accents, especially the top bad guy President Mendoza. This guy is in super-villain territory here. He plans his campaign movements on a chessboard, striking over pieces and gleefully laughing. When peaceful protestors are demanding to speak with him? Him army blows them all up outside his gate; completely mows them down. 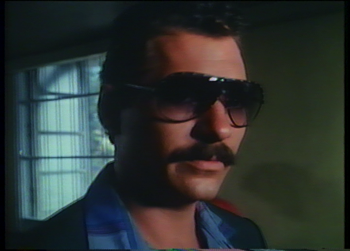 Corwin Sperry’s Max Draven is a joy to watch. I don’t know if it’s his voice we hear as everything is dubbed, but damn he made me laugh. His delivery is always inappropriate; too pedestrian when he should be emotive, too emotive when he should be playing it straight. And those lines he drops (“This is the land of rapid fire.”) We are in Reb Brown territory here folks.

Then there’s this Japanese guy, Akiro. His role seems to boil down to saving Max’s life at the last possible moment and look cool doing so. In a massive firefight Akiro picks off an enemy directly threatening Max by sniping them out a car window, then flashing his sunglasses at us. Akiro thwarts Max’s kidnapping by flying a remote control plane into the kidnappers car, then winking surreptitiously to the camera. When he and Max escape to the hills, Akiro flings frisbees around the cottage that are actually landmines. He’s awesome.

And for absolutely no reason that I can think of, about halfway into the film a black female impersonator slash informant, when trying to talk with Max, gets caught up in drive-by with a bunch of rogue militia guys in balaclavas on dirt bikes! You can’t make this stuff up. And how do you end a film like Blazing Guns? Have our two heroes Max and Akiro fly a freaking hang-glider whilst blasting at the army from up high with their automatic machine guns. Sure I basically just told you the story end-to-end, but trust me - see this film for yourself. It’s an absolute blast. 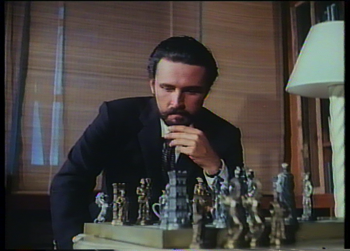 There’s a lot of familiar ex-pats and recurring faces in this film. Max Draven is played by Corwin Sperry (Phantom Soldiers, Battle Geese, Battle Rats). The awesome Akiro is played by Richard King (Phantom Soldiers, Final Reprisal, War Without End). Sisters Ingrid (Tough Cops) and Kristine (Black Cobra 2) Erlandsson (billed here as Ellis) play Rebel leader Carla and American Journalist Sheila respectively. Miguel Faustmann (Delta Force 2, Silk 2) gives us the spectacular Mendoza. The technical credits give us an idea into when and how the film was made; Teddy Page’s usual editor Edgar Vincent and cinematographer Vittorio Anders put this one together, with the story written by Rod Davis and the soundtrack handled similarly by Page’s regular music guy Patrick Wales. I don’t often get into the technical artists on my reviews but given the rarity, I figured fans of Teddy Page’s other films would like to know that they are in for a familiar time with Blazing Guns.

I’ve seen quite a few Page films now and Blazing Guns rates right at the top. This is a rip-roaring time; its runtime is actually quite long at 1:45 but it feels like 70 minutes it moves so fast. I’d put it a close second behind the legendary Phantom Soldiers. I watched this on an impossible to find Japanese VHS from the 80’s. It was a nice sharp fullscreen print with English dialogue and burned-in Japanese subtitles. I don’t know how you’ll see this, but do try to. I’d say with some degree of certainty that CINEMA has a way of surviving armaGEDDON, so search and you shall find!

Finally a massive thanks to Trash cinema expert Andrew Leavold for loaning me his Japanese VHS of the film. Be sure to check out his documentary The Search for Weng Weng, and the upcoming The Last Pinoy Action Film! 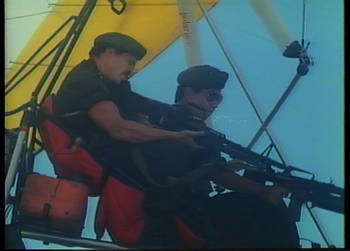 As usual with Teddy Page films, the action quotient is beyond high and the dialogue at times is laughable. Pretty much any time Max Draven is on screen I burst out laughing at his delivery. But the final laugh was reserved for the credits when I could not believe my eyes - the Doctor in the opening credits is played by.. Tom Baker! Tom Baker is the Doctor! Okay so it’s not THE Tom Baker, there was no scarf, jelly babys or Daleks but I still had to rewind those credits for a second look... 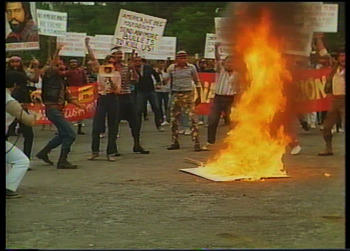 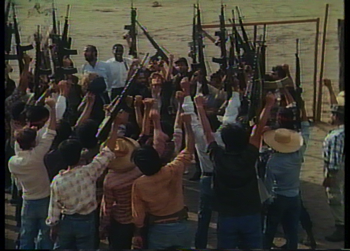 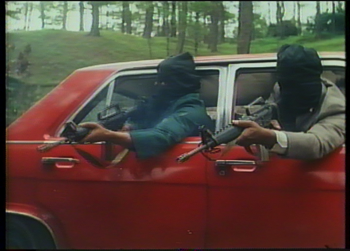 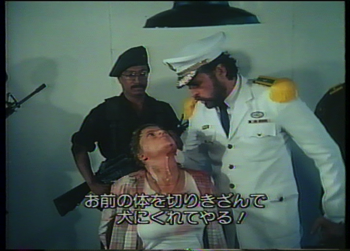 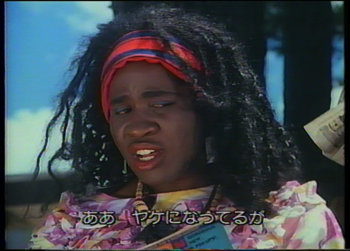 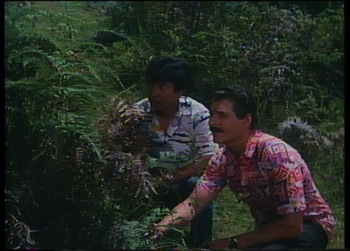 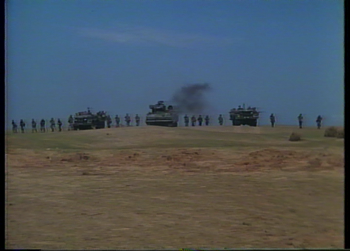 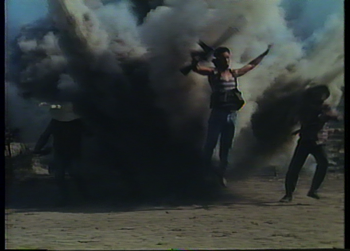