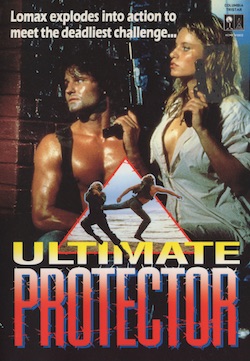 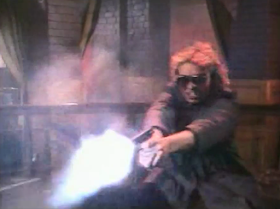 Mats Helge is like the Swedish counterpart to Indonesia’s Arizal (Final Score, Lethal Hunter, The Stabilizer). He pumped out z-grade actioner after actioner, giving the audience hyper violent gun battles, badly choreographed fights and terrible (often overdubbed) dialogue. Years ago I reviewed his most well thought of film, Ninja Mission, a completely over the top, violent action fest with copious gore. I didn’t even realise what I had my hands on initially when I scored this VHS.

“The Devil’s Room”, a military base slash prison on a secluded island (actually it’s a Scottish castle, but I digress..), run by Colonel Whitlock (David Carradine), a ruthless and somewhat slimy leader who is never without a drink in his hand (more on that later). Suddenly an alarm sounds; there’s been a breakout and guards are dead. Whitlock is pissed. Meanwhile on the mainland, three lovely ladies hire a boat to go to the same island to rescue a lost dog (yes). Even more meanwhile, John Santino (played by amusingly named A. R Hellquist, himself doing a great Kurt Russell impression) and Rick Lomax of the CIA also want to hire a boat and get to the island. Why is everyone trying to get to this island?

So the girls arrive and we learn they are basically the Swedish version of PETA, here to free caged animals used for experiments in Whitlock’s base. Lomax and Santino make their way there and it immediately get’s a bit Rambo as the boys stealthily kill their way through guards protecting The Devil’s Room. Lomax is caught and tortured. Some Captain called Hicks arrives to question Whitlock about his practices, Whitlock has another drink. The PETA-girls infiltrate the base and rescue a handful of dogs and rabbits and then find captured scientists. An alarm is triggered and it’s world war three with everybody involved on the battlefield. Whitlock puts his whiskey down for long enough to join in on the fun. Satino gets shirtless, looks at the camera and snarls “Whitlock… it’s time for you to die!" 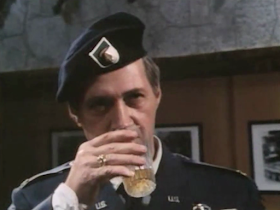 “He enjoys killing… so, kill him."

So that plot above may seem like it makes little sense. It is a pretty convoluted set-up, that’s for sure, but it is just so absurd to be highly entertaining. So many players involved, so little shits given by Carradine. But the reason you watch a Mats Helge film is for the extreme violence, and that is here in droves. We get a classic bar fight with added brutal nightclub gunplay, and just like Ninja Mission the guns with silencers sound like lasers! Pew pew pew! A boss looking guy in a leather jacket and sunglasses has a rifle with, apparently, a silencer too. Pew pew pew! It never ceases to make me laugh.

Later on we get mines exploding and plenty - and I mean plenty - of shots of soldiers flying in slow motion away from an explosion. Santino has a hilarious fight in slow motion with a plank of wood as his weapon but even MORE hilarious (and sure, spoiler warning) the end fight sees the two good guys fight against each other with one of the PETA girls telling them to stop. It’s the end level when playing Double Dragon when you fight your own brother? Hysterical. OH and an obligatory bomb disarming sequence! This film has everything. Don’t expect even B-grade cinema here though; go in with ultra-violent Z-grade expectations and you will have a good time. 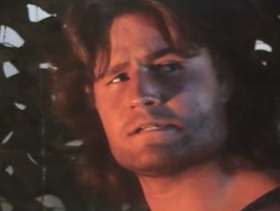 The cover, and the usual good guy vs bad guy routine may make you think that A. R. Hellquist is the lead role here - well, not really (despite some awesome grimaces to the camera). I think we see Carradine on screen more than him. But truthfully it’s never really as black and white as who is the lead in Ultimate Protector. It would be better to suggest that nobody truly is. The direction focuses on everybody in short bursts and in a cycle. I’m glad it was done this way, as the re-dubbed voices of everybody and the quality of most people’s acting I couldn’t take for extended periods anyway.

Let’s talk about David Carradine. I’ve seen him in everything from Kung Fu to Kill Bill and he’s always a class act. I can’t mince words here - Carradine is clearly drunk in this film. He is off his chops. All the lines are delivered painfully slow like he is trying not to pass out, he shuffles around his desk a lot and when the scene calls for him to have a drink.. buddy, that ain’t apple juice. You can’t even simply accuse him of phoning this one in from home; he’s phoning it in from the bar while eating beer nuts and eyeing off the waitress. He does get out from behind his desk a few times and does show off a couple of slower than usual kicks to the head, but man… this is rough. That is not to say his performance isn’t entertaining! I got a good laugh out of Drunk Carradine here. His best moments come towards the end (spoiler warning again) when he engages Plan B and kills every single one of his own men - in the back, mostly! This guy just could not give a damn. 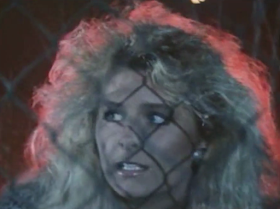 A side note: the Australian VHS I reviewed is curious. The title Ultimate Protector is not what the film is usually known as; it’s more frequently known as Animal Protector (making a lot more sense). Even more confusingly, IMDB (at least presently, though I have submitted a request to change it) incorrectly attributes Ultimate Protector to ANOTHER Mats Helge / David Carradine film - The Mad Bunch! The other interesting thing is our VHS cover pits Hellquist as the starring role and pushes the film more as a traditional action film. The rear text reads “He’s trained to think like a computer. He strikes faster than a cobra. He has the muscle to meet any challenge.” It gets worse however as it attributes “star” Lomax to Tim Earle, with a picture of A. R. Hellquist! Then it goes on to call him “The new Van Damme Dolf Lungren” (sic). And not a picture of Carradine anywhere! Amazing. 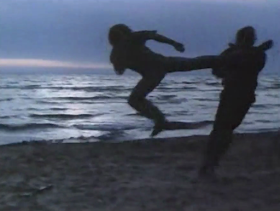 Spoilers. In an otherwise civilised disagreement in his office with Henderson, the two - whiskeys each - exchange schoolyard insults. “Whitlock, you’re dog meat” says Henderson. “Henderson, you’re chicken shit.” says Whitlock. Whitlock then kicks Henderson in the face whilst the glass is up to his mouth, shattering it and knocking him to the ground. If that’s not enough, Whitlock stomps on his throat, twists his foot and breaks his neck!