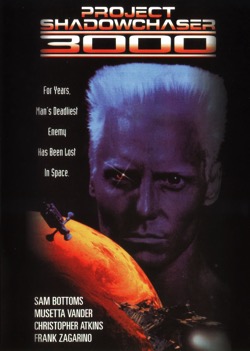 For years, man’s deadliest enemy has been lost in space. 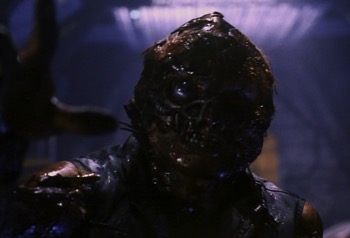 The crew of the Comstat 5 space station orbiting Mars are going about their daily business when the station triggers an alarm; whopping great space ship on collision course! Impact imminent in 5… 4… 3… you get the idea. Space ship “Siberia” crashes into space station, one crew member instantly killed, atmosphere venting, and the rest of the crew battle each other and their own fears. With little choice, it’s decided to explore the crashed ship. This was a bad idea. There is something on that ship that caused it to crash, and it is definitely not human. Let the hunt begin.

So I glossed over that plot pretty quickly, because you all know it. This is Aliens. This is Predator. Even a film as recent as Sunshine has this plot. It is not original by any stretch of the word. Our rag-tag crew of the wheelchair bound cigar-chewing captain Wheels (played by Bill Kirchenbauer), the crazy one called Snake (Christopher Atkins), our “hero” Kody (Sam Bottoms), the tough female warrior type Tatiana (Elizabeth Giordano, who seems to only star in films with Frank Zagarino!), the girl with the over the top Russian accent, Rea (Musette Vander, Project Metalbeast, Oblivion), the eccentric Professor, the ships dog… you can paint this picture. Even “guess she don't like the cornbread either” guy from Aliens (Ricco Ross) shows up playing basically the same role. The game here is to mentally work out early on who you think will survive, and who will not, and see if you get it right by the end.

And that fantastic plot device of the nuclear reactor going critical so we better hurry this movie along makes a grand appearance! 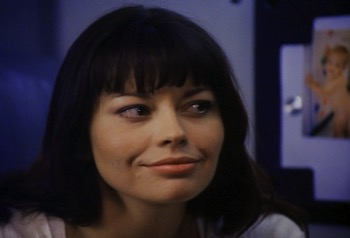 Our killing force (technically played by Frank Zagarino, but more on that in a moment) is gradually revealed to the audience in fragments. The first couple of kills are seen primarily through the eyes of the, as it turns out, cyborg (in a very Terminator visage). Others are in darkness or slightly off screen. We then learn that the already barely-seen Zags can shape-shift into the forms of crew members! The film just turned into The Thing as its crew versus crew, who is really who, etc. The stalk-and-kill via electric shocks and laser bolts is a blast to watch (pun intended).

The special effects are surprisingly very good. No, not 300 million dollar Hollywood good but there is nothing here to complain about. The ships in space drift along and have a good looking weight to them, the inside of the space ship switches between Red Dwarf and Forbidden World territory, and the computer generated additions are definitely more Sci-Fi and not SyFy. Fans of futuristic computers that look like 1983 are going to love this as well. And the action? Well this is, as it turns out, more of a sci-fi/horror film but just like Aliens there is plenty of bloody (and gory) violence to enable the rapid diminishment of the crew. But no kickboxing, damnit. 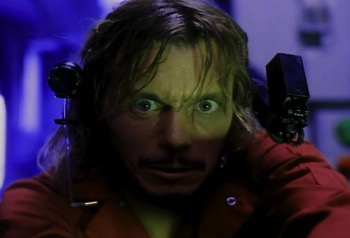 The only real downside to the film? A lack of the Zags! He only really shows his face well after the one-hour-ten mark (in a ninety-six minute long film), as his character spends so much of the film disguised as members of the crew. Thankfully when he does show, he is totally boss. The Zags plays a wonderfully deranged android, and his makeup (like the rest of the effects in the film) are really quite good. Part cybernetic endoskeleton, part wad of gory fleshy bits. Zags is totally believable as the android and has some obvious similarities to Schwarzenegger’s Terminator. I have actually watched these films completely out of sequence, and part three here is the first that I have seen so I cannot comment on how this android compares to the others, but I like what I see here.

I am genuinely shocked this film came out in 1995. It feels more like 1987, and it demonstrates its influences from that era clearly. Director John Eyres - of the first three of the Shadowchaser films - clearly enjoys his outer space sci-fi, having also produced Monolith, Convict 762, Dark Planet, and Xtro II. He has managed to film a quality little sci-fi-actioner with dabs of horror that feels like an 80’s film, in the Roger Corman tradition. There’s never any slow-down, no pointless character arcs, just a group of mis-matched space crew members being picked off one by one by a deranged shape-shifting android. What else do you need in a film?

Oh yeah, did I mention it’s a Nu Image production? Watch it now. 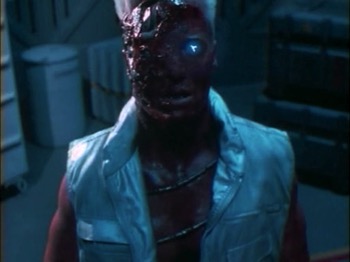 The Zag’s first line of the movie is to call, in a robotic voice, out to the ship's dog; “Here boy! Woof! Woof!"